Look for the Blue Rafts. You'll Find us There.

Our Philosophy and Our Dedication to You

Ohiopyle Trading Post is a small family run business that specializes in whitewater rafting trips on the Youghiogheny River. Our store is nestled in the center of Ohiopyle State Park, directly across from the waterfall. We are the closest outfitter to the put in on the Lower Yough. OTP runs all three sections of the Yough, the Upper, Middle and Lower with rapids ranging from class I-V. In addition to being an exceptional rafting company we have the premiere livery (rental) service in Ohiopyle. We have all new blue boats and our equipment is well kept and current. All of our rafts, inflatable kayaks and Shredders are self bailing as well as having foot stirrups. The advantage of being a smaller company in Ohiopyle is we are able to better accommodate the needs of our guests. Trip sizes are smaller and less crowded which equals less wait and more enjoyment. We also maintain a higher guide to guest ratio providing more assistance if the situation arises. Our staff is experienced, athletic and committed to providing the highest quality service possible. Our goal as a professional outfitter is to make sure you have a safe and unforgettable experience.

Joel Means, one of the owners of Ohiopyle Trading Post and River Tours, was born and raised in the Ohiopyle area. He started guiding on the Cheat River Canyon in West Virginia in 1980. Later in 1980, he began guiding the Lower Youghiogheny and became a trip leader by 1984. In 1986, Joel started guiding the Upper Youghiogheny, the class V section, and was one of the first 30 guides ever certified to run commercial trips on the Upper Youghiogeny. In 1991, he and his wife, Robin, opened their own outfitter, Ohiopyle Trading Post. Both graduates of West Virginia University's Business school, Joel and Robin combined Joel's guiding background with Robin's background in business to set the foundation of Ohiopyle's premier outfitter. They became the first outfitter to open since the early 1970s. They began as a livery and bike rental and later became a kayak dealer, selling kayaks and boating apparel.

After operating as a raft and bike rental, Joel and Robin purchased their Upper Youghiogheny rafting license in 1996 and began running commercial trips on the class V section of the river. Realizing the benefit of self-bailing equipment, they continued to expand their livery service by purchasing the first self-bailing rafts for rental on the Lower and Middle Youghiogheny.

In 2001, Joel and Robin welcomed their first child, Lilly, to the Ohiopyle Trading Post family. By 2003, their rental was the largest in town as they gained a reputation of having the best equipment and quality service. That year, they purchased their Lower Youghiogheny guided tour license and began running guided tours on the Lower and Middle Youghiogheny Rivers. With this purchase, they became the first outfitter in the states of Maryland and Pennsylvania to have guided tour licenses transferred to them. They set the standard by offering a fully guided service at all river levels and putting guides in boats creating a more personal and enjoyable experience for their guests. This was a major change in the industry, forcing the other outfitters to follow suit. 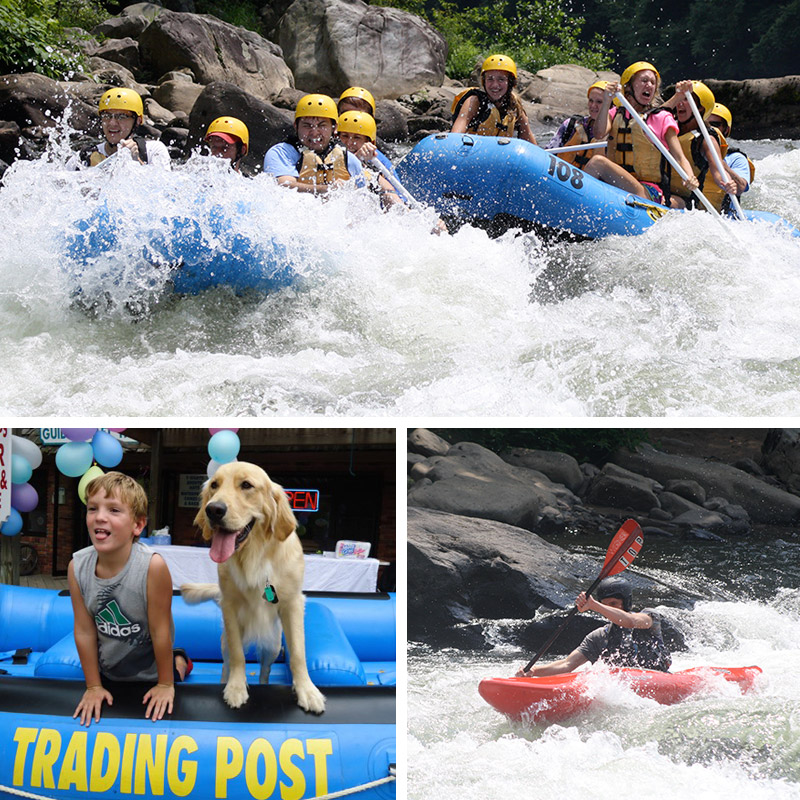 Ohiopyle Trading Post and River Tours is a first generation outfitter. Joel still guides trips on the Upper Yough to make sure the quality we strive for is maintained. Joel, Robin, Lilly and Max are very hands-on in the day to day operations of the business and can be found behind the counter at the outfitter, scooping ice cream at the Kickstand, or joining one of the trips on the river.

"Great way to end our summer!"

"I would 100% recommend this company and do it all over again. I may eventually work up the nerve to do the Upper Yough."
- Reviewer: ajcj_12

"he guides at OhioPyle love their jobs. They made the trip so much fun... everyone had a blast."
- Reviewer: McCoyGang

"We couldn't have asked for a better day on the river thanks to OTP!... Can't wait to do it again!"
- Reviewer: Marcella B

"Great bikes (condition) and great place to rent then to ride the Great Allegeny Passage in Ohiopyle."
- Reviewer: JudahGeneva